“She had a quirky, independent spirit that was wholly original. Wherever she went in the world, people were drawn to her wry wit, gentle charisma, and overwhelming love of humanity”. So it can be read in Margaret Sircom’s obituary.

It has now been a year since the passing away of the breast cancer diagnosed 43-year old teacher. Not only was she a devoted worker, part of the Vanier English department since 2001, but also an active member of the Montreal creative writing community. Among her involvements, she co-edited the 2001 poetry anthology Running with Scissors, which celebrates the poems of 19 young writers. 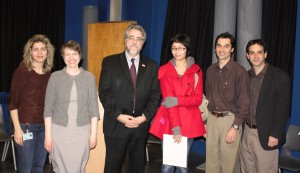 Miss Sircom deeply touched the hearts of her fellow colleagues and friends with her passion and special creativity. That is why the English department decided to give a Scholarship on her behalf. The annual award is given to a student with a good academic standing, having submitted a distinguishable portfolio of creative literary work. That includes poetry, drama, fiction, screenwriting, et al. All participants had until November 14 to submit their work. This year’s recipient is Rosemin Nathoo who impressed many with her maturity and imagery. An honourable mention was also attributed to Oliver Wockner’s comic “cheese soufflé” short story, which shows that one can write whatever one wants.

It was at a brief and informal ceremony that Miss Nathoo received her award, mostly among English teachers. A humming of appreciation emanated from the crowd as they heard some of the verses of Rosemin’s works. As a matter of fact, as soon as one hears the words flowing one after the other, one discovers the young writer’s experimental form and play of sounds.

“I usually write when there’s something I’d like to say that I can’t say aloud. I like to catch and remember what bounces around in my head and I have a fascination with grammar, wordplay and languages”, explains the Environmental and Wildlife Management student, who is now in her fourth semester at Vanier. It is that fascination with the English language that creates an art full of rhythm and musicality. For Nathoo, it is the senses of freedom and soothing that appeal to her when she writes: “It [writing] is liberating and calms me down”.

For Miss Nathoo, it was an honour to receive the scholarship, even though she did not get to know Meg Sircom. “I feel flattered, encouraged and guilty for not having known Meg”, she says. When asked what work she was most proud of, the humble and shy poetess does not have a specific answer: “I’m proud of the portfolio in general. My favorite poem is usually the one I’m thinking about at the time.”

Although the recipient receives recognition and attention for winning the award, it is impossible to forget the material prize. The latter is of 500$. “For now, I’m saving it for a rainy day. If no rainy day comes along anytime soon, I’ll use it for a tattoo I’ve wanted for quite a long time, a painting of a downy woodpecker on my right shoulder blade”, explains Nathoo about the money. The young lady seems to have everything planned for her near and even farther future. Unlike many students, she knows what career she wants to pursue: “As far as I can see, I’d like to start up in the environmental field as a tech, in water and plant management, hopefully. I might end up in teaching eventually; that’s something I’ve also always wanted to do, in English or biology.”

Therefore, it might surprise many that Rosemin Nathoo does not expect to pursue a career in writing. However, she states it will always be a part of her life: “Everything involves writing. I’ll probably keep applying for magazines and competitions, but not as a career. I’d like to finish my modern language DEC at Vanier for personal interest if I can.”

one day, there won’t be bridal veils
but daisies
reaching outwards with
soft hands and chosen colours,

all atoms
strangely in the shapes of solar systems.

Sara Andrade is a 1st year Liberal Arts student at Vanier College. She is a reporter for the Vanier Insider.