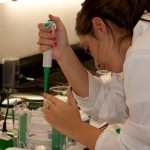 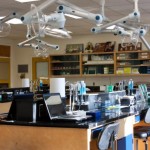 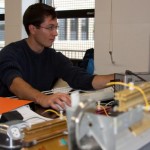 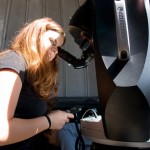 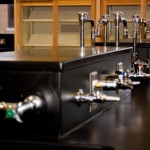 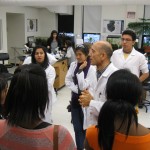 Who hasn’t read a news story about advances in science helping bring a criminal to justice, even years after he committed a crime? One of those advances is PCR – polymerase chain reaction, a process that allows a tiny sample of DNA to be amplified enough to allow testing. And now Vanier College Biology students can work with such modern tools, because a PCR cycler is part of a 1.5 million dollar investment in laboratory renovations, upgrades and new equipment at the College.

New Organic Chemistry Lab – the Jewel in the crown

The new Organic Chemistry lab is the jewel in the crown of the 10 Science labs at Vanier that are used by all students in the various Science Programs. Coming with a price tag of one million dollars the new lab is a large, bright workspace with the latest in lab design options.

In all, the lab has 12 work stations for 24 students. Each station is equipped with its own sink and plumbing, and colour coded controls for gas, and compressed air and vacuum. The vacuum source and water aspirator at each station will allow students to carry out reduced pressure experiments.

Six ultramodern large double fume hoods can also easily accommodate 24 students in 12 groups. Each fume hood has two sinks and its own colour coded gas, air, vacuum and water aspirator controls. Underneath the fume hoods, there are vented cabinets to store acids, bases or solvents. Each type of storage cabinet has its own separate ventilation system.

The new laboratory is also very well equipped with a gas chromatograph, an IR spectrophotometer, polarimeters, a rotary evaporator, balances and hot plates, as well as all the glassware and tubing needed for organic chemistry. Add to the chemical paraphernalia, a computer with access to the internet and the teaching tools it provides.

Going over the list of new Biology lab equipment is like being a kid in the proverbial candy store. In addition to the new polymerase chain reaction – PCR Cycler, other big ticket new items include a dissolved oxygen sensor to study photosynthesis in aquatic environments, DNA electrophoresis chambers to separate and analyze DNA fragments and a light trans-illuminator to visualize and analyze DNA and protein electrophoresis gels.

“This is exciting Molecular Biology and Genetics that used to be carried out only at the university level, but it’s a standard part of Biology II at Vanier,” indicates Biology teacher, Edward Awad.

And what do the Biology labs look like? They are large, clean, well lit, with individual fume venting cones above each work area for any off gassing from chemicals used in biology studies. Recently when visiting science teachers from other Cegeps saw the equipment and topnotch labs here at Vanier, one of them exclaimed: “Wow, we don’t have anything like this. These labs are to be envied!”

In the Physics Department, which has four labs, renovations meant old counters and cupboards moved out, and two large new laboratories emerged with more usable space. In one of the renovated Mechanics labs, students now work at counters equipped with air tracks and other equipment needed for mechanics experiments. There is plenty of space to move around for motion detection experiments and other computer driven equipment.

The overall atmosphere is welcoming and exciting for the students. The labs are all equipped with new computers that are fully networked for easy access to the internet and to Webworks, a key on-line study resource that is used extensively at Vanier for Physics and Mathematics problems. Computers are also used in physics labs for data acquisition and analysis.

In the Electricity and Magnetism lab each of the twelve work stations is equipped with a computer, an oscilloscope, a signal generator, and low and high voltage supply. There are also devices to measure the charge/mass ratio where students can track an electron beam. Each station also has all the other equipment and components needed to study as well as build circuits and measure every aspect of electrical activity.

The Waves and Modern Physics lab has also been enlarged and equipped with new high speed computers for class notes and internet access. “At Vanier, the Science labs are never overcrowded,” says Hodé Erdogan of the Physics Department. “Not only are the labs large, but also the scheduling of lectures and lab sections means there are just twenty to twenty-four students in a lab at one time. Students work individually or in small groups depending on the experiment and activities.”

In addition to its four Physics labs, Vanier is also one of the few Cegeps in the province equipped with its own Observatory, used extensively in the Astrophysics course. A brand new 11” reflector telescope hooked up to a camera and a new GPS star tracking system dominates the centre of the room under the dome.

Key in a star identifier and the fully interfaced computer will rotate the telescope and automatically locate the star. Students can then make images of stars and planets.

In the spring, star classes take place under the open sky when the 11” and another 8” telescope get transported into the field and star gazing and photographing fills the night.

The Vanier Physics Department also does joint activities with the Royal Astronomical Society of Montreal – RASC. The Department runs a series of astronomy lectures with invited guests from leading space institutions and universities.

It also organizes public astronomy parties in the field behind the college where students and interested members of the public can interact with professional astronomers and use the telescope to view directly the night sky.

“With an innovative program and renovated labs, the Vanier Physics Department is an inspiring place to study Physics in Montreal,” concludes Don Hetherington, Dean of the Faculty of Science and General Studies.